CDQAP Ruminations: How stockmanship training for employees can improve your bottom line 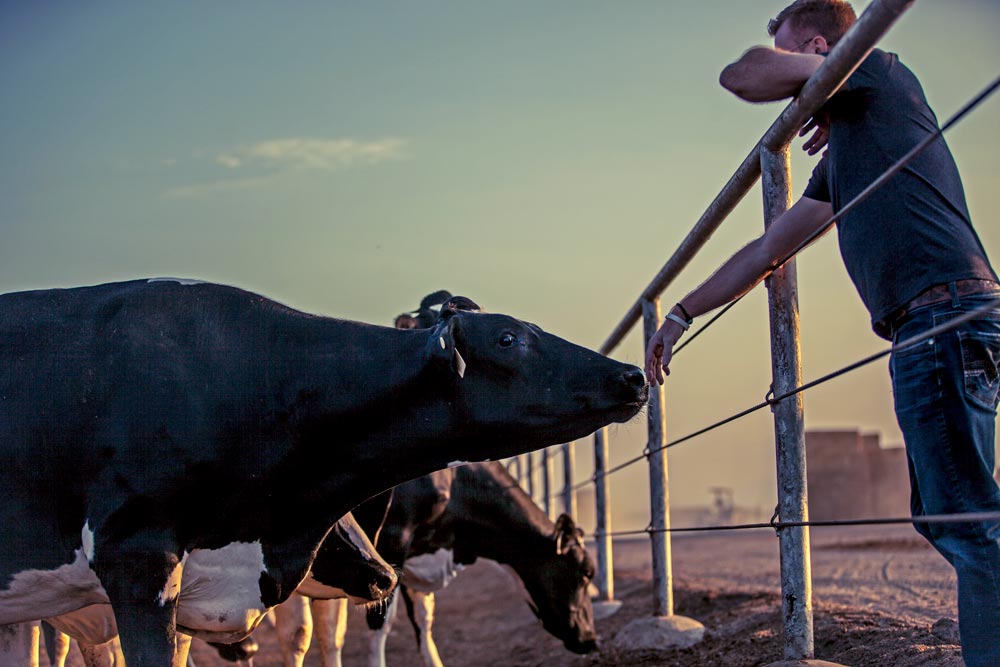 Highlights: What You Need to Know About Animal Handling & Profitably

Low-stress cattle handling has been around for decades with pioneers like Bud Williams and Temple Grandin describing basic behaviors like flight zones and point-of-balance, particularly in range and feedlot cattle.

As livestock and poultry industries have matured, so have the concepts of animal behavior. Animal welfare research has become more sophisticated, exploring into areas such as avoidance thresholds, stress hormones and production impacts. With employee training time at a premium however, producers may justifiably wonder “Does stockmanship training pay for itself?”

“Rough handling”, meaning handling animals in such a way that raises their stress level, can result in measurable reduction in production, increased retained milk and decreased conception. How much of a production-effect occurs on a given farm depends, of course, on employee attitudes and practices. Some of the relevant research summarized below suggests that low-stress animal handling training for new employees and annual refresher training for all employees can be valuable.

Several decades of animal behavior research has been reviewed and gives important clues into the potential negative effects of rough handling on production. Temple Grandin reports that milk yield can be reduced by as much as 10% when rough handling is used during cow movement. Excessive noise (shouting and slamming of metal gates) has been shown to increase heart rate and anxiety in cattle. One study of cow recognition demonstrated that cows not only remember rough-handling employees, but exhibit a 70% increase in residual milk when milked in their presence. An Australian study observed that forceful handing accounted for about 16% of the differences in annual milk yield between farms. Although the authors of the study caution against assuming causation, one study involving Minnesota herds showed that the herds participating in a stockmanship training program had a 1,785 pound higher rolling herd average than those that did not, after adjusting for herd size and bulk tank somatic cell count.

There may also be non-production advantages to stockmanship training for employees. For example, differences between farms in the level of cow fearfulness accounted for 14% of the variance between farms in conception rates. Finally, animal contact is often ranked as the first or second leading cause of injuries on the farm. At least one study observed that forceful interactions appeared related to incidents where the handler was kicked, head-butted or run over. There is also one anecdotal report from California that dairies where personnel had received stockmanship training saw a 50% reduction in worker injuries.

Dairy Stockmanship and the FARM Program

Some 90% of producers in the U.S. participate in the Farmers Assuring Responsible Management (FARM) animal care program, primarily through their processors. The program involves a second-party evaluation every three years and its guidelines have periodically undergone revisions. The most recent version (FARM 3.0) requires documentation that three new requirements specific to animal care have been met:

Each of these requirements is discussed in greater detail below. An additional requirement that tail-docking is not performed on the farm is a mute issue in California since the State abolished tail-docking in 2010. These requirements, (absence of tail docking, the VCPR, and welfare training & ethics agreement) have been designated as “Priority I Areas,” a new classification in the FARM program. Unlike the other FARM guidelines, failure to demonstrate compliance with these Priority I Areas during an evaluation triggers a “mandatory corrective action plan” and re-evaluation in one year.  A second failure can result in removal from the FARM program.

The FARM program requires that the dairy has a document signed by the producer and his “Veterinarian of Record” confirming that a VCRP exists between them.  California’s definition of what constitutes a VCPR can be found in Section 2032.1 of its Veterinary Medical Board’s minimum practices standards regulation. The FARM program has provided a template for a VCPR, which is expected to be updated annually or more often as needed.

The FARM program requires that an “Ethics Agreement” describing the dairy’s animal care policies be signed annually by employees with animal care responsibilities. The agreement must specifically state that the employee will not abuse animals and will report any abuse witnessed. A template agreement has been provided by the FARM program in both English and Spanish. An alternative Animal Handling Policy developed by Western United Dairyman is also available in English and Spanish. Dairy producers are free to use these templates or develop one of their own.

The FARM program requires that, all employees with animal care responsibilities have completed basic stockmanship training as well as having been trained in their area of animal care responsibilities on an annual basis. An example of this later requirement might be that a calf feeder is trained in the dairy’s calf feeding, handling and treatment procedures. All animal training must be documented and the FARM program provides templates to record training for individual employees or by the type of training.

Producers needing to implement a stockmanship training program for their dairy’s employees have several options:

Option 1: Developing Your Own Stockmanship Training

Due to the on-going nature of employee training, the most effective option for providing employee Stockmanship training may be to develop your own program. Such “homegrown” training can have advantages: it avoids contracting expenses, it can be scheduled according to employee availably and, perhaps most importantly, the training can focus on your farm’s specific practices and policies.

In August of 2017 CDQAP partnered with the California Beef Council to offer a pilot Train-the-Trainers” course in dairy stockmanship. The pilot course’s materials have been collected and are available for downloading from a UC file-sharing portal.  Available files include the program’s introductory slides which review the new requirements for FARM, how adults learn and how a combination of free, on-line videos and on-farm drills can be used to tailor a training program to a particular dairy. Also available are all the class handouts including a listing of on-line video and poster resources as well as templates for VCPR and employee ethics agreements in English and Spanish.

Putting It All Together: Creating Your Own Stockmanship Program

Each producer will determine the focus and extent of their annual stockmanship training. Some producers may be satisfied to simply have their employees watch one or more videos over a lunch break. Other producer may choose to the hands-on demonstration approach. Still other producers, particularly for their new employees, may choose a combination of on-line learning and in-person drills. The most effective learning typically involves combining elements of both video training and hands-on drills.

The outline below provides an overview of the basic information pieces that can be useful to include in a stockmanship training program.  The information can be covered in a single session or broken up over several days.

Part I: Introduction to the Farm’s Animal Handling Policy

**This session can take place in an area of the dairy that is not currently being used, such as a pen or alleyway.

A printable CDQAP Stockmanship Training Drill Teaching Outline & Talking Points document has been drafted by CDQAP as is available for producers to use for the development and delivery of their training.  Links for additional animal handling videos, posters and templates are available in the resources section at the end of the page.

Some universities and colleges have offered training in cattle stockmanship. These programs may not be offered on a regular schedule; it may still be worthwhile for an interested producer to contact their extension advisor about availability. Periodically the National Beef Quality Assurance Program will offer Stockmanship and Stewardship training. While these programs do address basic handling techniques, they tend to focus on practices for feedlot and range cattle such as gathering, penning, chute work and loading rather than dairy areas such as free-stall barns and the milking parlor. A third potential source of training could be your herd veterinarian.

An extensive selection of free animal handling videos is available.  The list below includes only videos that are available in both English and Spanish, allowing employees to select presentations in their preferred language.

FARM Stockmanship Videos: Working in partnership with several universities the FARM program has produced a series of eight stockmanship videos, ranging in length from one to six minutes long. Each video “chapter” covers different topics of stockmanship such as “How Do Cows Perceive Their World” and “Handling Cattle in Alley, Holding Areas and Milk Parlors”. All eight short videos have also been collected into a single 27-minute video entitled “Dairy Stockmanship”.

New Mexico State Dairy – Safety Series: New Mexico State has produced a series of seven excellent videos addressing various aspects of dairy worker safety ranging from one to eighteen minutes long. The videos cover a variety of topics including PTO and silage pile safety. For the purposes of stockmanship training the 9-minute video entitled “Outside Animal Care” is focused on safely moving cattle.