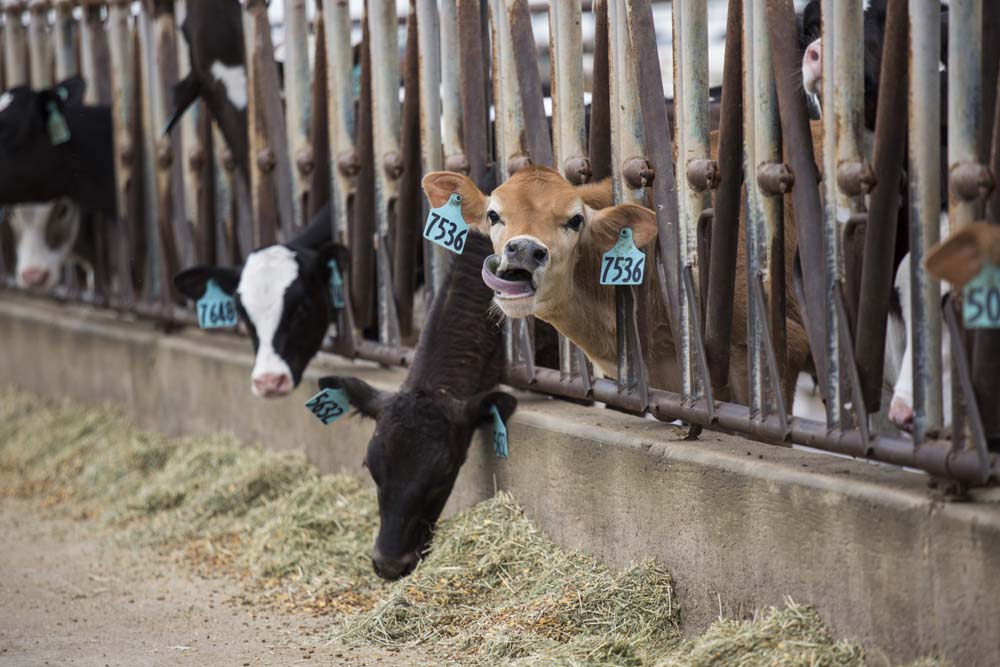 Highlights: What you need to know about the new medicated feed rules…

The newly revised Veterinary Feed Directive (VFD) rule becomes effective on January 1st 2017. The rule applies to all food animal sectors, including cattle and swine, sheep and goats, poultry and even bees.

The collective result of this and related rules is that while “medically important antibiotics” (antibiotics used in human medicine) will still be available for use in feed and water on the farm, they will no longer be available over-the-counter.

The two most important components of these rules direct that:

Compared to other livestock and poultry producers, new Veterinary Feed Directive (VFD) regulations should minimally effect dairy producers. To avoid confusion however it’s best to plan with your veterinarian now.  For a quick, understandable review producers might start by watching the 7-minute video from the FDA covers the VFD basics.
One thing that has not changed relative to drug regulations is that it remains illegal use antibiotics off-label in feed. Put another way, feeds containing antibiotics can only be used exactly according to the label. Feeding antibiotics using a different dosage or duration of treatment, use in a different species or even for a different disease condition is a violation of the federal Food, Drug and Cosmetic Act.

Why are the VFD rules being implemented?

In order to address the problem of antibiotic resistance, the new rules promote more veterinary oversight of antibiotics important in human medicine. Expertise provided by veterinarians will help optimize antibiotic use on farms, limiting development of resistance. For this reason, the veterinary authorization must come from the herd’s veterinarian, who has oversight of the medication program on the dairy, called a VCPR (see below). Internet pharmacies do not meet these requirements. Besides helping limit resistance in humans, veterinary guidance should also aid in keeping antibiotics effective on the farm as well. Efforts to curtail resistance have not been limited just to agriculture. Human medicine has seen extensive doctor-patient education programs and, in California, hospitals are mandated to have programs to minimize antibiotic resistance.

Some bacteria, like the one on the right have become resistant to many antibiotics.

California dairy producers should experience only minimal disruption to their operations for three reasons:

Thus, the most noticeable change for some producers will be having to obtain a VFD order either for the use of medicated milk replacer or use of antibiotics in feed to address periodic conditions of young stock such as an outbreak of respiratory disease.  Lastly, while these federal rule changes do not change the status of antibiotics given by injection, a new California law will make injectable antibiotics prescription-only in 2018.

Who can create a VFD order?

The only person who can generate a VFD order is the herd veterinarian. For California producers their veterinarian must be licensed to practice is the state and acting under a valid Veterinarian-Client-Patient-Relationship, or VCPR. Briefly, having a VCPR means that the veterinarian is overseeing the medical care of the herd’s animals and is directing the herd’s medication program. A VCPR requires first-hand familiarity with the farm’s operation and must include regular farm visits.  Again, internet pharmacies do not meet these requirements. The specific requirements for a VCPR vary by state. In California a VCPR is defined in Section 2032.1 of the State’s Code of Regulations.

Only the herd veterinarian directing the herd’s medication program can create a VFD order.

What drugs are included under the new rules?

Feed Antibiotics – All antibiotics which the FDA has determined to be important in human medicine are covered under the VFD rule and will require a VFD order for use in feed. This includes but is not limited to the penicillin family, tetracyclines, lincomycin, tylosin, tilmicosin and the “sulfa drugs”. The FDA maintains and updates a list of drugs requiring a VFD order for feed on their website.

What drugs are not included under the VFD?

Some of the many tradenames and indications not covered under the VFD rule include Rumensin® for milk production efficiency, Bovatec®, Deccox® and Corid® for coccidiosis prevention and control, Safe-Guard® for internal parasite control and Bloat Guard® for bloat prevention. Importantly however, if one of these products is combined with a medically important antibiotic, the combination product must be approved by the FDA and will require a veterinarian’s VFD order. If, for instance, Bovatec® (lasalocid, which does not require a VFD) is added to a ration along with Aureomycin® (chlortetracycline, covered under the VFD rule) then the approved combination product will require a VFD. Producers should consult with their veterinarian to determine which feed additives and additive combinations require a VFD order.

Monensin and other ionophores and coccidiostats will not require a VFD order.

What about medicated milk replacers?

To purchase a milk replacer containing oxytetracycline and/or neomycin, a producer will need to have his veterinarian provide a VFD order. A caveat to this is that there are a limited number of products containing powdered neomycin labeled for on-farm mixing into milk or milk replacer. These products will require a veterinarian’s prescription. Whether use of a medicated milk replacer requires a VFD order or a prescription depends on how the label of the replacer or the medication is written. In either case however use requires some sort of veterinary authorization. Lastly, some milk replacers contain medications to control coccidiosis such as Deccox® or Bovatec®. These medications are not covered under the VFD rule and require no special authorization, so long as the medicated milk replacer doesn’t also contain a medically important antibiotic. Producers should consult with their veterinarian to determine which feed additives and feed additive combinations require a VFD order.

What are the paperwork logistics of VFD compliance?

The FDA has published guidelines detailing those components which needed to be included in a VFD. A number of template VFD orders have been posted and the American Veterinary Medical Association (AVMA) has made an electronic format available to its members. In addition to these generic VFD templates, many companies have prepared specific VFD forms for each of VFD drugs that they market. One example is the VFD order template for tilmicosin an antibiotic that is sometimes used in replacement heifers during an outbreak of respiratory disease.

A veterinarian can provide a paper copy, an electronic copy or fax transmission of the VFD order to both the producer and feed distributor. Alternatively, the veterinarian can provide his client with a VFD order which the client can then deliver to a feed distributer of his or her choosing. FDA maintains a list of companies acting as distributors listed alphabetically as well as listed by state. More than one location may be included in the same VFD order as long as the different facilities are owned by the same producer and the VFD order is for the same class of livestock and specifies the same use. A VFD order may be written to apply to an operation(s) for up to six months, but there will be an “expiration date” listed after which the VFD is no longer valid. The veterinarian, producer and distributer each must retain a copy of the VFD order for two years.

The herd veterinarian will provide a copy of the VFD to the producer, but at the farmer’s request may also transmit another copy by email or fax directly to the feed distributor.

What about medicated feed left over from deliveries during 2016?

As of January 1, 2017, all products covered by the VFD rule being fed on the farm will need a VFD order. So, if after December 31 2016, farmers have left-over medicated feed on hand which is labeled for over-the-counter purchase, they must work with their veterinarian to obtain a VFD order before feeding those products to their animals.

How can I prepare for a seamless transition to VFD implementation?

In order to prevent disruption to your dairy’s operation you should plan ahead to ensure timely delivery of medicated feeds you anticipate using. To this end:

What about the future?

These changes in federal law are separate from changes in California state law which become effective on January 1st 2018. The California Department of Food and Agriculture will partner with CDQAP in 2017 to help producers prepare for those changes as well.