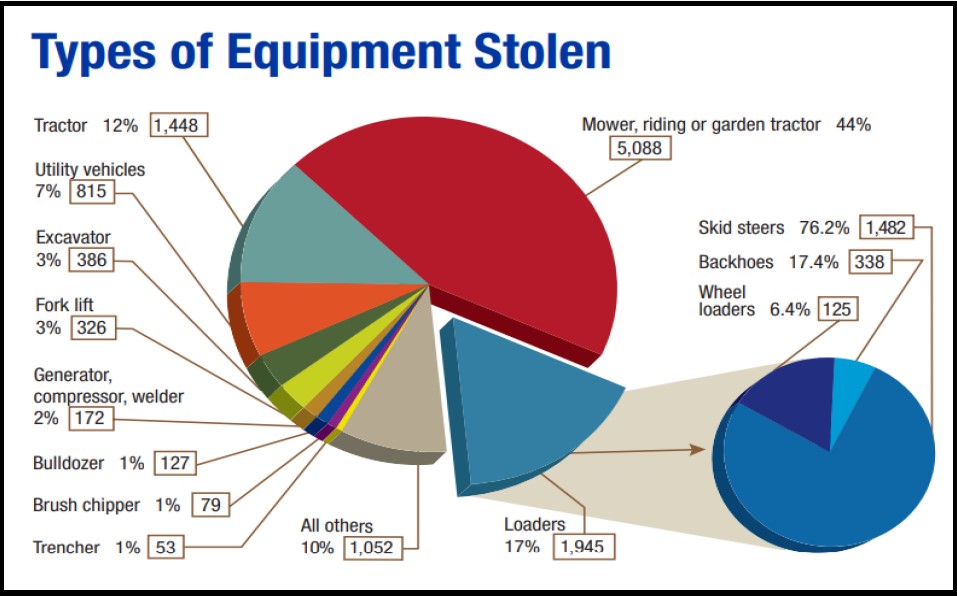 A previous CMAB survey suggested at least half of California’s dairies have experienced some form of rural crime, including theft, trespass, vandalism, illegal dumping, clandestine drug labs, and even employee assault. To arm producers with the best preventative information, the Zenith Insurance Company and CDQAP teamed up with local, state, and federal law enforcement experts to offer a free webinar this month. The recording is now available. Selected highlights from the webinar include:

Bill Ludwig, Zenith’s Assistant Vice President for Risk Management, kicked off the webinar describing what types of agricultural equipment is stolen in the U.S. Mowers, tractors, utility vehicles and various types of loaders accounted for 80% of farm equipment claims. Ludwig also described Zenith’s long-standing partnership with the California Rural Crime Prevention Task Force. The Task Force coordinates programs such as the nationally recognized Owner Applied Number database, which dramatically improves the chance that stolen property can be traced back to its owner. Assigning an OAN to a farm is free and the farm-specific number can be applied to any type of property, from tractors to chainsaws, irrigation pipe and even firearms.

Sargent Joe England from the Tulare County Sheriff Office briefed the audience on the apparent increase in armed robbery of dairy employees. A review of California crime reports revealed thirteen “major incidents” on dairies over the last five years, ranging from armed robbery to murder. England detailed the string of armed robberies on five Tulare County dairies in March. The incident ended with the arrest of four suspects, one of whom had previously been a dairy employee and had concluded that dairies were a “soft target.” The same suspect also had a criminal record, highlighting how background checks of prospective employees may prevent problems in the future. England finished by providing recommendations for what employee should do before, during, and after a robbery. Discussions with employees should include reporting suspicious persons and vehicles, complying with assailants’ orders during a robbery, and how to access a landline to call 911 afterwards, when cell phones have been stolen.

It’s estimated that up to half a billion dollars of property from California farms and ranches is lost to theft every year. David Gosvener, an investigator for the Tulare County District Attorney, provided advice on how to prevent farm theft and increase the likelihood that property will be returned when it is stolen. Good lighting and security cameras (along with signage announcing their presence) make farms less inviting targets. The cost of good quality cameras, ones that can be monitored by cell phones, has come down dramatically, for as low $300 to $500. Even fake cameras may have a deterrent effect. Law enforcement generally recognizes that locking gates at the main entrance may not be feasible, given the high traffic dairies experience at all hours. Perimeter gates however, used in combination with ditches, hampers thieves’ ability to access remote areas of the dairy where they can steal property such as copper wire from well pumps, irrigation pipe, or bee hives. For problem areas, county sheriffs have had great success luring thieves with “bait” equipment like generators or ATVs that have been tagged with either GPS trackers or an invisible SmartWater tracking marker. CDQAP has produced a detailed reference describing crime prevention options for dairy producers.

Dr. Michael Payne with the CDQAP detailed some of the tactics being used by animal rights activists in California. In particular the dairy and poultry industries have experienced protests which have disrupted the operations of farms and processing plants. Activists have also conducted high profile illegal “rescue” (theft) of animals from farms. California farms have also seen application for dairy employment by undercover activists, highlighting the need for vigilance in hiring practices. Activist organizations have covertly installed illegal cameras and used drones to capture video footage edited for use in their marketing and fundraising efforts. However, partnerships between ag organizations and law enforcement have also had significant success. Numerous activists now face felony charges in multiple states. Two animal-rights activists were ordered to compensate owners of a San Joaquin County egg farm $332,000 after the farm was forced to destroy 45,000 chickens following their trespass. CDQAP has produced a detailed reference on dealing with activist trespass and drones. One important action producers can take is to post “No Trespassing” signs at all entrances and every 1/3 mile. Such signage allows a District Attorney to increase trespass charges filed from a $75 misdemeanor up to $1,000 and six months in jail.

From the Department of Homeland Security, Jesse Rangle, a physical and cyber-security expert discussed the critical importance of producers working with employees to develop a culture of vigilance and reporting. This includes regular training for employees on how and when to report suspicious people and activity. Rangle highlighted how local law enforcement use crime reports to identify crime patterns and gang activity, so assuming that reporting a theft is pointless or that someone else will report it retards law enforcement’s effectiveness. Rangle pointed out that over twenty years of law enforcement, a common thread he had observed was that in most cases prior to a crime, someone “saw something suspicious or heard something sinister or encountered something that just wasn’t right.” Producers and their employees, he emphasized, were the eyes and ears of local law enforcement. There are multiple methods for reporting. For producers, this starts with building a relationship with your local sheriff ’s office, possibly through the local Rural Crime Task Force or the local Farm Watch organization.

Thomas Waltz, a federal critical infrastructure project manager working out of the Sacramento Sheriff ‘s office, described the many local and state resources available to the ag community. The primary FBI partnership with private industry is the InfraGard program, which started after 911. After a brief background check, industry representatives can receive intelligence and training not typically available to the general public. Particularly for processors, the federal Cybersecurity & Infrastructure Security Agency (CISA) can assist in preventing both deliberate contamination and ransomware attacks. Similar cybersecurity expertise is available locally through the California Cybersecurity Integration Center (CCIC). Waltz finished up by explaining how the Central California Intelligence Center “Fusion Center” allows these many multiple law enforcement agencies come together to share information.